Home lifts have a lifespan for at least 20 years under normal lift maintenance and use. During this period, in addition to lift maintenance costs, the main expenditure of use is electricity bills.

Today, green sustainable and environmental protection has become a topic and focus, and the power consumption of the electricity of home lifts has become more and more valued.

How should we look at the energy saving effect of home lifts?

How should the energy -saving effect of home lifts be identified?

In daily life, we can see the power of home appliances and their energy consumption levels, so when buying and using home lifts, there will be similar problems in our considerations. In fact, the identification of the energy-saving elevator can also adopt a similar five -star system, or AAA, AA, A, B, C five levels. Based on different types of household elevators, and combined with different design details, the power consumption of home elevators is compared.

Now the home lifts can be divided into 4 categories: 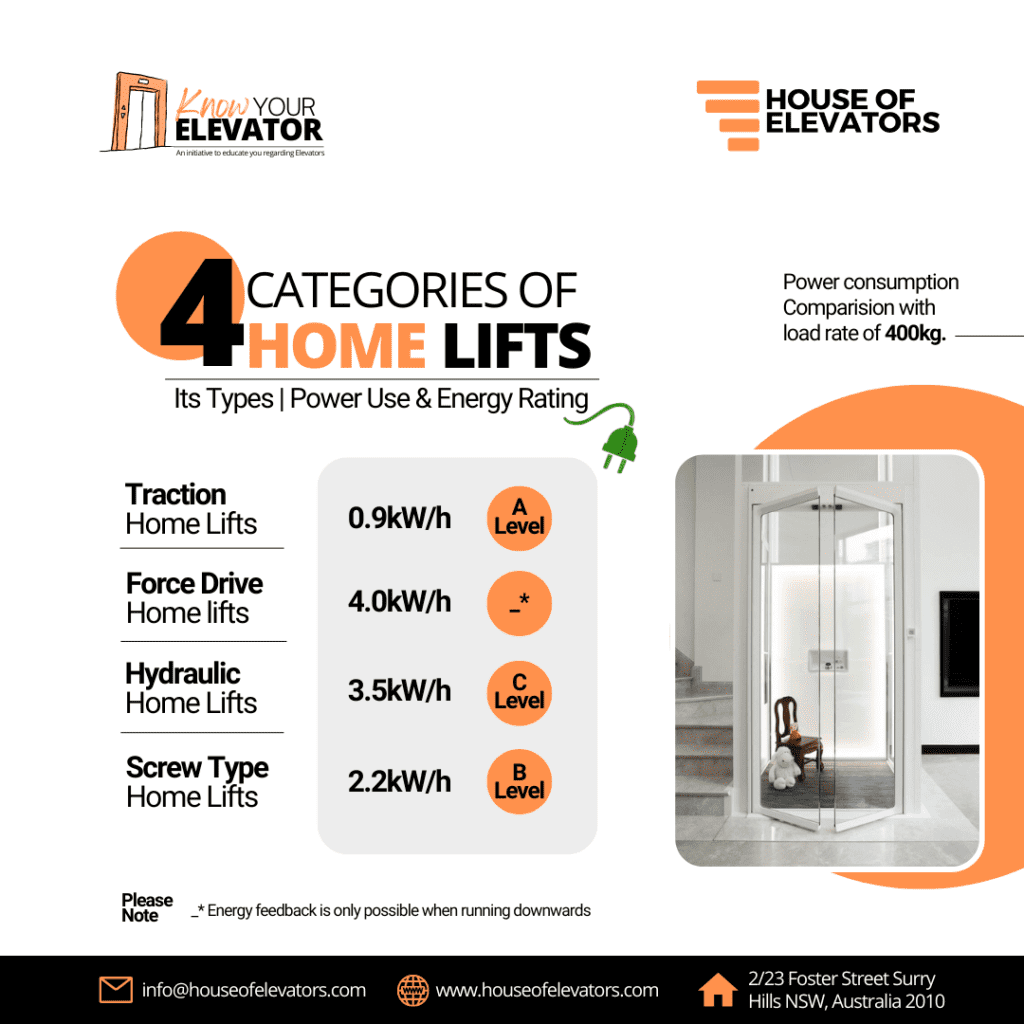 The driver motor or traction machine is installed at the top of the hoistway. There are two sets of guide rails in the hoistway, for cars and counterweights. The car and the counterweight are linked together by cables and the set of the sheave wheels.

The traction machine drives the steel cable. And the car and the counterweight move opposite directions on their respective rails. Because most of the counterweight and the car’s weight are balanced, the driving motor work is not used to lift weights but to adjust the speed.

Traction home lifts with VVVF and permanent magnet synchronous motors can be included in the A level.

Similar to our usual hoist, the main motor can be placed at the top or bottom according to the height of the building, and the elevator can go up and down through guide wheels. The coiled steel cable requires a certain space, so there is a limit to the height.

Because there is no counterweight to balance the weight of the car and passengers, the drive motor must overcome gravity in addition to regulating speed. Presently, the  strong-drive home lifts have a rated power of 4KW/h. Energy feedback is only possible when running downwards, but this function is another investmen

The car is driven by a hydraulic cylinder. There has always been a problem with hydraulic elevators, that is, during the service life, oil will leak due to the aging of the seal. So, the sealing ring needs to be replaced every 5 years on average.

The power of the hydraulic home lift is 3.5kw/h. The speed adjustment is mainly through the oil solenoid valves. The oil pump motor is AC two-speed. Energy consumption can be rated as C class.

The structure of the screw-type villa elevator is very simple, that is, an elevator surrounds a large screw to drive the car or the platform up and down. Its biggest feature is the simple structure, which gives a lot of space for the design of the elevator.

The elevator rated power of the screw type home lifts is 2.2kw/h, most of which are equipped with small dimension single-phase motors and can be rated as B grade.

At present, if you want to find an elevator that is more energy-efficient than the combination of inverters and synchronous motors, maybe the only option is to configure an energy storage system for energy feedback, or use the top of the elevator shaft to install a solar power supply system.

The above is a comparison of power consumption between different types of home elevators with the same load rate of 400kg. If you choose a different load range and applications, then there might be corresponding changes for smaller and compact elevator designs.

We will evaluate and investigate the actual operation status and working environment of elevators on site before offering new Home Elevator Installation Service contracts. If defects and hidden dangers are found, rectification opinions will be put forward. we will ensure that the Lift Installation is complete and reliable before the contract starts unless the new contract contains relevant disclaimers.